ClassOne cited actual performance data from a CopperMax pilot installation on a Solstice tool at a Fortune 100 customer. Over a six-month period the customer tracked their actual production operating costs while using the new chamber for copper TSV, Damascene and high-rate copper plating. For the three processes with CopperMax they reported that operating costs were reduced between 95.8% and 98.4% compared with previously used conventional plating chambers.

“Many of our emerging market customers are starting to do copper plating,” said Kevin Witt, President of ClassOne Technology. “So we’ve spent a lot of time on the process, working to reduce customer costs and also increase performance. And the new CopperMax chamber is proving to do both.” 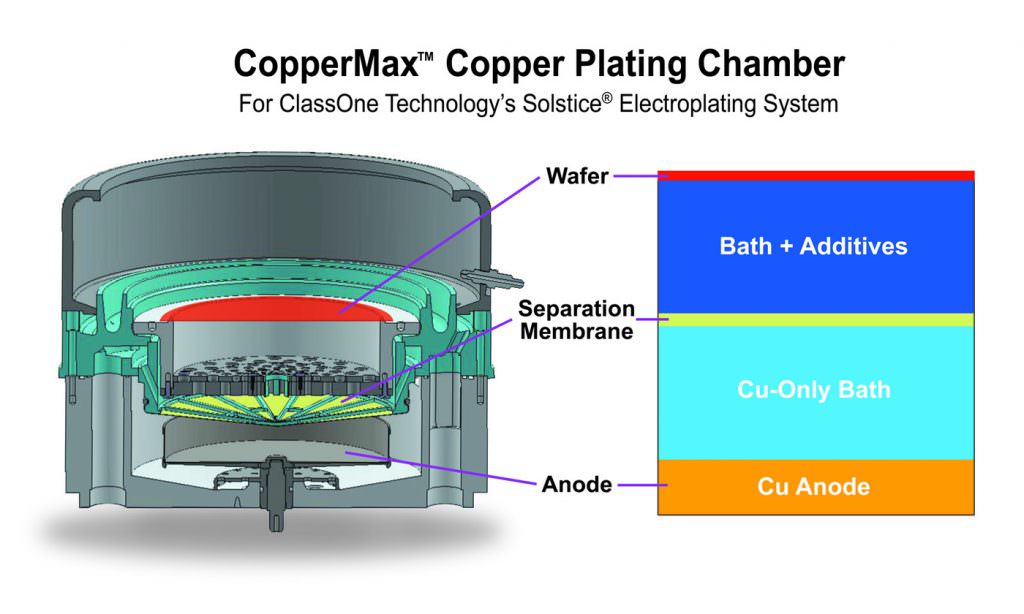 ClassOne pointed out that consumables are the largest cost factor in copper plating. Optimizing copper plating generally requires the use of expensive organic additives — which are consumed very rapidly and need to be replenished frequently.

“We learned, however, that over 97% of those expensive additives were not being consumed by the actual plating process,” said Witt. “Most were being used up simply by contact with the anode throughout the process! So, we designed our new copper chamber specifically to keep additives away from the anode — and the results are pretty dramatic. Significant savings can be realized by high- and medium-volume users with high throughputs as well as by lower-volume and R&D users that have long idle times.”

The company explained that the CopperMax chamber employs a cation-exchange semipermeable membrane to divide the copper bath into two sections. The upper section contains all of the additives, and it actively plates the wafer. The lower section of the bath contains the anode that supplies elemental copper — which is able to travel through the membrane and into the upper section to ultimately plate the wafer. However, the membrane prevents additives from traveling down to the anode, where they would break down and form process-damaging waste products.

As a result, the CopperMax bath remains much cleaner, and bath life is extended by over 20x. This increases uptime, enables higher-quality, higher-rate Cu plating, and it reduces cost of ownership very substantially.

For example, a customer using a Solstice system with six CopperMax chambers and running TSV and high-rate copper plating will save over $300,000 per year just from additive use reductions.

In addition, the CopperMax also reduces Cu anode expenses. The chamber is designed to use inexpensive bulk anode pellets instead of solid machined Cu material, which cuts anode costs by over 50%. And since the pellets have 10x greater surface area they also increase the allowable plating rates.

“Like the rest of our equipment, this new chamber aims to serve all those smaller wafer users who have limited budgets,” said Witt. “Simply stated, CopperMax is going to give them a lot more copper plating performance for a lot less.”

About ClassOne Technology
ClassOne Technology provides innovative and affordable wet-chemical equipment solutions for users of smaller substrates, 200mm and smaller, who traditionally have been underserved by the larger equipment manufacturers. ClassOne’s products include electroplating for development and high-rate production as well as spin rinse drying, spray solvent tools and more. Based in Kalispell, Montana, ClassOne Technology is built upon decades of experience from industry veterans who continue the ClassOne tradition of delivering advanced performance tools at lower cost. ClassOne Technology is a sister company to ClassOne Equipment (ClassOneEquipment.com), long respected as the industry’s premier provider of refurbished processing tools, with over 2,500 systems installed worldwide.