When ClassOne Technology introduced its new SolsticeTM electroplating systems at SEMICON West last month they didn’t expect to actually sell their first production unit off the show floor, but that’s what happened. The company reported that the Washington Nanofabrication Facility (WNF) at the University of Washington purchased the Solstice Model LT plating tool for installation at its state-of-the- art facility in Seattle, Washington. The WNF is a national user center that is a part of the National Nanotechnology Infrastructure Network (NNIN). WNF is a full service micro and nanotechnology user facility and the largest public-access fabrication center in the Pacific Northwest. It provides 15,000 sq ft of laboratories, cleanrooms, and user spaces focused on enabling basic and applied research, advanced R&D and prototype production.

“The Solstice LT was exactly what we’ve been looking for,” said Michael Khbeis, Ph.D., Associate Director of the WNF. “It’s a very flexible development tool with the capabilities we need to serve our customers and perform a range of advanced processes — Through Silicon Via (TSV) plating and MEMS are particularly important to us. Plus, the LT price was within our budget, so we made our purchase commitment right there at the show.”

“And WNF wasn’t the only one,” noted Kevin Witt, ClassOne’s VP of Technology. “The customer interest in Solstice at SEMICON was unprecedented in my experience. We had high-level discussions with more than a dozen serious potential buyers, and many of those look like they will turn into purchase orders in the coming weeks.”

To date, ClassOne has announced two Solstice models: The semi-automated Solstice LT features 1 or 2 chambers for development and pilot lines and starts at $350k. The fully- automated, cassette-to-cassette Solstice S8 provides up to 8 process chambers, throughputs up to 75 wph and starts at $1M — which is less than half the cost of equivalent 300mm tools from the large manufacturers.

“We’ve been very gratified by the overwhelming customer response we received at SEMICON,” said Byron Exarcos, President of ClassOne. “We describe what we do as ‘advanced wet processing tools for the rest of us,’ and it’s evident that users are really understanding — and appreciating — the concept.”

To learn more about the Washington Nanofabrication Facility, visit www.wnf.washington.edu. For additional information about ClassOne Technology and its products, visit www.classone.com.

Formed in early 2013, ClassOne Technology (ClassOne.com) is a new ClassOne company that develops and delivers innovative new wet-chemical equipment solutions especially for the cost-conscious users of smaller substrates, who traditionally have been underserved by the big manufacturers. Based in Kalispell, Montana, ClassOne Technology is built upon many decades of experience from industry veterans who continue the ClassOne tradition of delivering first-class quality and customer service at an affordable price.

ClassOne Technology is a sister company to ClassOne Equipment (ClassOneEquipment.com), long respected as the industry’s premier provider of refurbished processing tools, with over 2,500 systems installed worldwide.

TM Solstice is a trademark of ClassOne Technology. 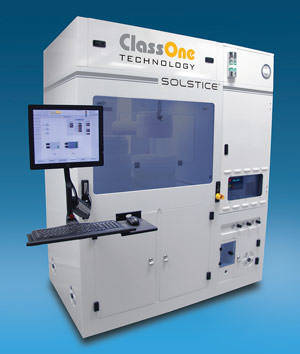