“We see the MEMS market growing significantly,” said Kevin Witt, ClassOne’s Chief Technology Officer. “However, one of the fundamental challenges is that MEMS users need to be cost sensitive, so they generally cannot afford the large, expensive tools that were developed for CMOS technology. This is why Solstice has become very attractive to many emerging markets like MEMS: It gives them the advanced processing technology they want at a price they can afford.”

ClassOne Technology introduced its Solstice family in 2014 as a high-performance yet cost-efficient electroplating solution for users of ≤200mm wafers, in MEMS and many other emerging markets. Solstice systems are priced at less than half of what similarly configured plating systems from the larger manufacturers would cost — which is why Solstice has been described as “Advanced Plating for the Rest of Us.” These tools can electroplate many different metals and alloys in a broad spectrum of processes, either on transparent or opaque substrates. Solstice models are available for development use as well as for fully-automated, cassette-to-cassette production, with throughput of up to 75 wph. ClassOne also supports customers with world-class process development, deployment and service around the globe.

X-FAB Semiconductor Foundries, with headquarters in Erfurt, Germany, (www.xfab.com) is one of the industry’s leading analog/mixed-signal and MEMS foundry groups, manufacturing silicon wafers for automotive, industrial, consumer, medical and other applications. Its worldwide customers utilize X-FAB’s modular CMOS processes in geometries ranging from 1.0 to 0.18 µm, and its special BCD, SOI and MEMS long-lifetime processes. The company operates five production facilities in Germany, Malaysia and the U.S.

ClassOne Technology (www.classone.com/) develops and delivers innovative new wet-chemical equipment solutions especially for the cost-conscious users of smaller substrates, who traditionally have been underserved by the larger equipment manufacturers. Based in Kalispell, Montana, ClassOne Technology is built upon many decades of experience from industry veterans who continue the ClassOne tradition of delivering first-class quality and performance at an affordable price. ClassOne Technology is a sister company to ClassOne Equipment (ClassOneEquipment.com), long respected as the industry’s premier provider of refurbished processing tools, with over 2,500 systems installed worldwide.

Solstice® is a registered trademark of ClassOne Technology. 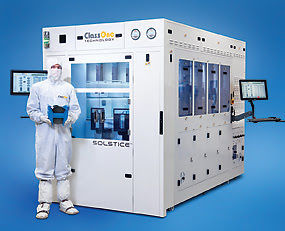